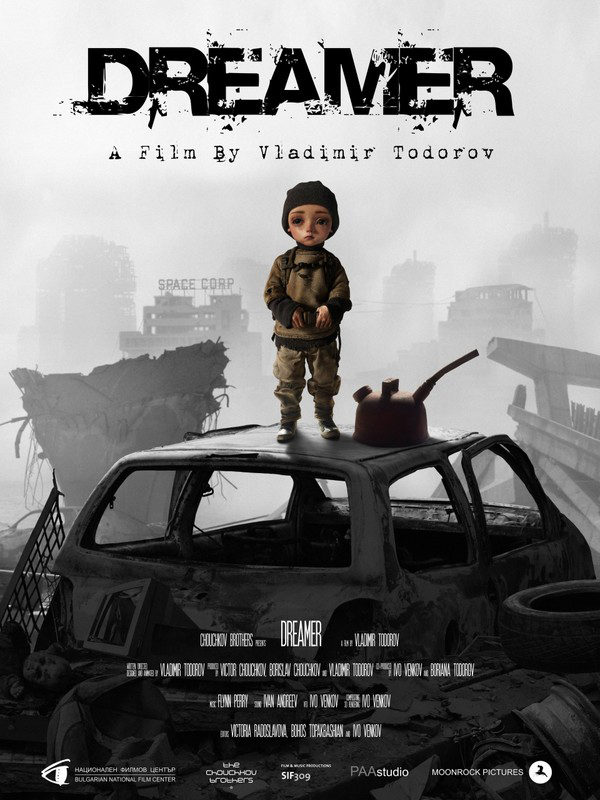 Dreamer is a dystopian fairytale about the hope of rebuilding a world that has suffered seemingly irreversible disasters. The hope of fixing something that has gone horribly wrong. The hope of a second chance.
Alex is the lone survivor, the last living soul in a world devastated by a major catastrophe. Against all odds, he has survived the disaster, only to discover that he is the only one left in a ghostly shell of what the world used to be. Frustration and despair have strengthened his resolve to find a way out. In a desperate attempt to send a signal to the stars, where he believes his parents, together with the rest of humanity have migrated, he has built a crude emergency lamp, mounted on an old pickup truck. Trouble starts when his SOS machine runs out of fuel, forcing Alex to set out on yet another exhausting hunt for gasoline. He scavenges the tanks of the burned-out mangled vehicles piled up on the streets. But he’s out of luck. Not a single drop of gas! Resigned and disheartened, he is on the verge of giving up hope, when he comes across Angie. The girl’s lifeless body lies in the rubble, and Alex rushes to help revive her. When Angie awakes, she is in Alex’s room surrounded by all his toys and memorabilia of a past life. But what Angie finds most interesting is Alex’s collection of dead plants. A miracle occurs as she touches one of the dried-up twigs. A small green leaf sprouts out of the spot. Then another, and another. Soon the whole city is covered in a canopy of green as the two children look over its landscape in awe. And then an alarm goes off and Alex wakes up in his bed. Across the street lives Angie, the girl in his dream. The world outside is as normal as normal can be. Or is it?